This restaurant originally opened in 1989 only 3 years after I was born, my parents actually had one of the most important business meals of their careers one evening here many years ago.   Austrian  rooted “Werner”, the owner then closed the doors of Old Vienna in 1991, but since then reopened at the same premises in 2011.  Due to his Austrian roots, this reflects in a major way on his menu with sauerkraut, schnitzel’s and many other Austrian delicacies having an influence. 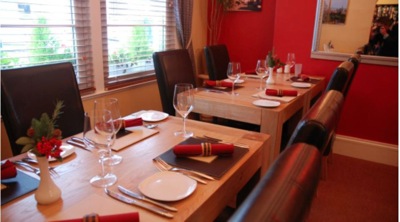 When we entered the restaurant, “Werner” the chef was waiting at the bar to greet us, it seemed that on this Wednesday evening he would not only be our waiter but chef as well.  This originally scared be abit thinking we would be ignored, but I can gladly say by the end of the meal I was pleasantly surprised how well this worked, ill explain more about that below.

Bread was quickly served which was lovely and warm, this bread which is home made was lovely.  The flavours were so mixed with a hit of paprika, garlic and many other herbs, it was quite dense and doughy, which when accompanied with lashings of butter was gorgeous.

I was then then served “Grilled Goats Cheese on Garlic-brushed Bruschetta with Vine Tomato and Basil Concasse“, immediately I was surprised by the size of this, it was a very generous portion.  This was one of the most gorgeous goats cheese starters I’ve had at a restaurant, the dressing which covered the salad leaves etc was so very sweet and paired great with the cheese.  Everything on the plates matched well, looked great and tasted better.

Now while waiting for the mains to arrive obvious “Werner” was busy away in the kitchen, and while my table was chatting away we were all of a sudden shocked to hear yodeling…… Yes yodeling coming from the kitchen, it seems this chef used to have a past role in the “Generation Game”, needless to say “Werner” took several breaks from the kitchen on the evening in question to chat to us all, and he really is the life of “Old Vienna”. 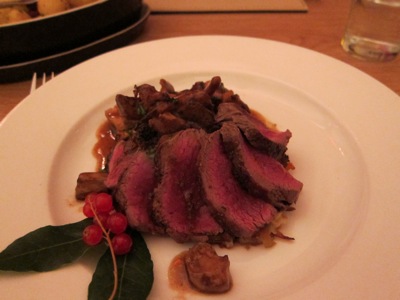 After a lot of laughing, chucking and interesting conversation with the chef we moved on to my main which was  “Roe Deer Steak on a Carrot and Potato Cake served with sautéed Wild Mushrooms”.  This dish again was great, served as requested “Rare” and the mushrooms going great with the deer.  I was pleased to see that the portion was not in line with the large starter and was well proportioned.   This was served with a selection of vegetables such as Carrots and fennel seeds, Beetroot with Horseradish and a few others, roast and chipped potatoes were also served. I don’t think the additional potatoes were really needed, as each main already comes with a  carb element such as my Carrot and Potato cake, which was great.

Now on to the best part of any mean….. dessert! I had to order the “Linzer Torte – Austria’s answer to the bakewell tart” just to say I had sampled something really Austrian at an Austrian restaurant.  This I can only describe as a very “almondy” almost marzipan tasting sponge, with a blueberry jam filling…… it was heaven.  The sauces added to it, however I don’t think the mango was needed as it had a sharpness which was just abit too overpowering.

Werner really is the star of this establishment and spent a good further 45minutes after our meal, sharing stories and his past experiences.  He makes the service personal and relaxed, however I am glad that on busy evening he has a waitress who assists him, as I’m sure if he didn’t have help everyone would miss out on his great entertainment.

This was a superb meal, I would no way hesitate to recommend close friends, or infact anyone I know to pay it a visit.  When you do just make sure to listen out for that faint sound of yodeling….. an experience not to be missed, both for the chef and for the food!