Having read in the recent “Good Food Guide 2011” about the this small pub/restaurant I was eager to pay a visit.  At first glance the online sample menu is a mix of Modern English with some Gastro-Pub elements, they also have a “Bar Menu” which is the old traditional pub fare.  This restaurant again is going with the local produce approach and shows alot of willingness to use the most seasonal produce with a changing menu etc.  The establishment in recent years are really moving up the ladder in terms of food, with various awards being awarded and the most recent change, being moved from 80th place to 52nd place in the top 100UK restaurants.  The chefs individually also won various awards with chef “Matthew Downing” being awarded “South West Chef of the Year”.

Also within recent months they have added a Tasting Menu, I believe this shows the amount of effort these chefs are showing, in a attempt to move up the ladder of restaurants and really make this a well known place.

Here is an example of the tasting menu taking from November 2010.

The restaurant is located on the outskirts of Exeter and is very convenient for travelers using the M5, as it is only 5minutes from the main Exeter turn off.  It is not in a built up area and is placed in a green belt of lovely fields, guessing this is where the “in the Green” comes from in the name.  From the external the building is what you would expect for any traditional country pub, with large signs and good located lighting.

Upon entering you immediately walk into the pub/bar area, where a member of staff who is behind the bar greets you and shows you to available seats within the bar area.  Drink orders are then taken and menus provided, this is a welcoming area to sit and relax while browsing through the menu with a good atmosphere. 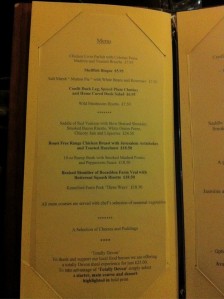 Usually if a tasting menu is offered this is the direction I would always go, however looking through the menu I noticed “Sticky Toffee Pudding” from the A la Carte.  Immediately I had my mind made up that I would be sampled this dish no matter what, so the tasting menu was moved to one side for the A la Carte.  They offer a “Totally Devon” deal at the moment where they have highlighted items within the menu which if you combine these they form a deal of £25.00, unfortunately my main/dessert selections this evening were not on this offer.

Within a few minutes our waitress returned and took our orders for the meal, she was extremely polite and well mannered, also when ordering our main she did well to enquire how we were happy with the meat cooked.  After another 10minutes we were then invited into the main dining area, which is through some narrow passages and is decorated in much of the same way, with photos dotted around the walls and tables spaced well apart, but not to far apart to make a lacking of atmosphere.

The bread and butter was already awaiting on the table.  Bread on offer was standard white roll slices, with similar wholemeal granary slices, these were both good with excellent texture but nothing really jumped out to the flavour.  Butter on offer was extremely thick and creamy and cooled to a good room texture.

An Amuse Bouche was then served of “Chicken in a Thai Broth”, this was presented well with the chicken being on a small cocktail skewer.  The chicken was moist and succulent and just fell apart when bitten into, the broth was also extremely flavoursome with excellent oriental flavours and abit of chilli kick on the back of the throat.

The starter was then served of “Confit Duck Leg, Spiced Plum Chutney and Smoked Duck Salad”, however when presented with the dish I was rather surprised and had to even re-read the wording of the menu.  The “Confit Duck Leg” was more of a terrine which had been wrapped in thin bacon/Parma ham, and had an extremely strong and good flavour, however this was not what I was expecting and was confused not to see crisp confit leg.  Also the “Smoked Duck Salad” element was thinly sliced duck breast which lay beneath the terrine with the salad being your standard micro-leafs placed on the side.  The final element being the “Spiced Plum Chutney” again was very small dots placed around the plate.  Overall I was left quite disappointed with the dish, not because of the lack in flavours from the duck as this was strong on both accounts, I found myself disappointed due to the chutney being more of a thin sauce and dotted around making it almost impossible to get any flavour.  If the chutney was served in a side pot to allow a good quantity to be used I think this could be a very pleasing dish. 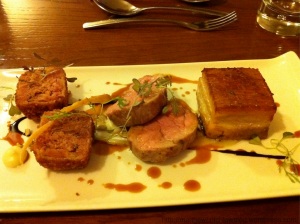 The main of “Kenniford Farm Pork ‘Three Ways’” was then served, this was presented very well and looked pleasing to the eye with vegetables served in a side dish.  The first style of Pork served was a croquette, which I am assumed Ham Hock however unfortunately the waitress did not know, this had a brilliant flavour with a good crisp breadcrumb outer coating.  The second cut was a pork loin which was served pink and again was extremely tasty, and very tender to cut.  The final cut was the belly pork, which was the biggest disappointment as the fat was not rendered down enough, and was left soft and rubbery with what should be a crackling topping, this was not a good taste at all with the abundance of still white/un-rendered fat.  Unfortunately the sauce provided placed beneath the loin, was a thin apple sauce, again this was only provided in the smallest of volume and this would have been nice to have more to get the true pork/apple flavour as the dish did seem to lack some sweetness.  The mix vegetables provided were extremely well cooked with a good bite to them, and a good mix provided.  Overall I was left disappointed with the dish mainly due to the belly pork, however I found the croquette extremely good. 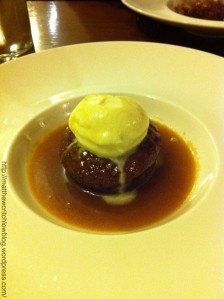 Dessert was then served of “Sticky Toffee Pudding with Butterscotch sauce and Clotted Cream “ I was immediately shocked by the size of dish, however this was not a disappointment as a large smile drew across my face.  The sponge it self was lovely and dense, but without being too stodgy/clingy within the mouth and had a lightness about it, it was well formed and fully packed with lovely sweet and chewy dates.  The butterscotch sauce may be one of the best I have ever tasted, it was not thin and could easily coat the back of a spoon, with the deep butterscotch smells/flavours radiating throughout.  The large thick scoop of clotted cream also was brilliant, and had just started to melt and ooze down the side of the pudding when served. 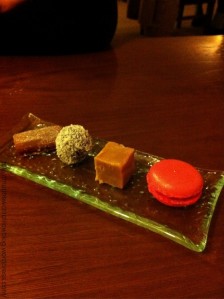 Coffee and Petit Fours were then served, my black coffee was deep and strong with a great flavour.  The Petit Fours of Turkish delight, Ice Cream Coconut Chocolate, Vanilla Fudge and Strawberry Macaroon were all very good with the Macaroon being light as a feather and a small piece of strawberry jam/jelly placed in the centre.

Service was very good for the entire evening with the meals being served with a good amount of time between, and also plates cleared accordingly.  The staff were all very polite and worked well and not once did I a single one stop to chat to one another etc.  A very welcoming addition as well which is rare to see in these times is a large jug of tap water already placed on the table without request.

The total cost of the meal came to £69.58, which I believe to be slightly higher than what I would have liked to paid considering the above thoughts.

I was slightly shocked to see at the end of the evening quite a low score on the bottom of my pad, as I had expecting this establish to score highly.  I think due to the disappointment with the wording of the starter, which led my immediate disappointment when presented with it.  Then followed by the main course which was also a slight let down with the pork being not cooked with a good crisp topping etc and the lack of flavour coming from the sauce etc.  The highlight of the meal was dessert with a very well done pudding.

I expected abit more from such a fast rising restaurant within the UK restaurant scene, with maybe just abit of “Wow” factor needed.  I left the restaurant feeling full but underwhelmed, I would return however I will wait until a new season menu is produced to see if the worded is slightly more detailed.