I had never heard of this restaurant before, until I was just browsing through TripAdvsior one afternoon out of boredom. I decided to pay it a visit on a Tuesday evening in April.

Upon arriving we were invited to sit down and have a drink in the bar area first while we browse the menu. The menu was good and I enquired to how often this is change, the kind waitress stated that they try and change it once a month.

After making our menu suggestions we were shown through the main restaurant area. It is all quite formal in here, clean white table clothes, though it does have that cottage feel still, which I quickly learnt as I just managed to see I had to duck under the low beams of the ceiling! 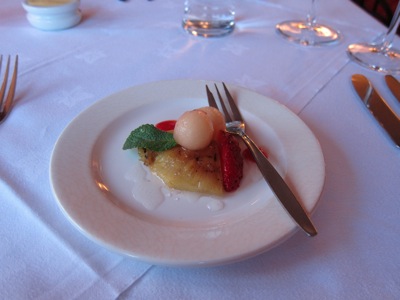 We were then served a small Amuse Bouche, this was tasty and really clean in terms of flavours.

Bread was then offered by the waitress holding a large basket of different rolls, these were a selection of white, brown and white with sesame seeds. The bread was ok but nothing I would go on about, it could have done with being served warmer.

My starter of “Chicken Liver Parfait, Toasted Brioche, Truffle Mayonnaise” was then served in around 20mins of the Amuse Bouche. I was slightly disappointed with this as the Parfait around the edges seemed to be slightly dry with a small crust, the whole thing was more of a Pâté than a parfait. It was missing that gorgeous creamy texture and strong taste I was expecting. The truffle mayonnaise added to the dish but was not enough to make up for the main element.

The main dish was then quickly served after the starter was removed from the table. Is this now not the best presentation of carrots ever in the history of dining! After I had got my initial giggles out of the way, did my small worship to the devil, I then began to eat. The steak was lovely and “Rare” as requested, was seasoned really well as also. It was the star of the plate how it should have been, but the potatoes lacked some flavour but the mushroom jus more than made up for this. 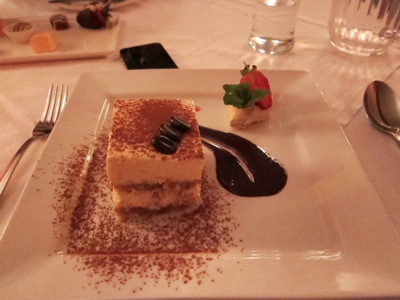 The Tiramisu was not bad, lots of cream and coffee flavour with the layers clearly visible, I’m not sure if the chantilly cream was needed with the amount already in the dessert. The chocolate sauce added a great element and went well with the coffee flavour. Though half way through I really was just lacking in any flavour and it seemed to be killed by the amount of cream.

Petit fours were then served, my one true annoyance with these things is, if there are 3 diners then there should be 3 items of each, or the items large enough to split to share! We all want to sample these find looking things and not fight (if dining with family) over who is having which. Needless to say though these were very very good, the fudge was lovely, but the star had to be the white chocolate coconut truffle.

Had to take a photo of the strawberry just to show attention to detail!

The service on the night was good, with the 2 waitresses doing a good job and being chatty, while keeping the atmosphere relaxed.

I don’t think I would be in a big rush to come to dine here again soon, nothing was particularly bad, but nothing really jumped out at me either. There was a slight wait at the beginning of the meal for the starters, but then speed of the mains made up for this.