Baking is a sort of secret passion of mine, I love to do it but I seem to always struggle to get the time and always say “Im going to give Christmas baked gifts this year to family”, but my words never really turn into reality.  This year I am really making an effort with baking and trying different cakes,tray bakes and lately having been really wanting to do more cupcakes.  Now making the basic cupcakes are not that difficult, but the decorating which separates this standard fairy cake sponge to a true beautiful cupcake is the great decoration.  I started looking around Devon for various cupcake decorating classes which I thought would be vast and many being run, however I was soon disappointed to find these are extremely difficult things to find.  I tried all sorts of places from garden centers, to even emailing the various bakers around to see if they could offer a class.

All of these efforts and emails did not turn up a single class, I did however find a single class being held at a local garden centre, but typically it was being run on a weekend I am in London on my food tour! (Always my Luck).  I gave up all hope at this point and decided it was just not going to happen.  Several weeks past when one morning I was checking the various tweets of people I follow, I noticed a re-tweet of Chepstow Cupcakes doing a class near Ashburton in Devon.  I quickly emailed “Helen” who explained the class would be covering the various different styles of decorating from icing to piping, I managed to secure a place for 1Pm on Saturday 13th November and is being held in a small garden centre.

As I drove into the car park and parked the car I couldn’t help but feel slightly nervous, as I really didn’t know what to expect.  When I walked into the small garden centre cafe I was quickly greeted by “Helen” who was waring an apron covered in pictures of Cupcakes so I immediately knew I was in the correct place.  Looking at the table before me in the room, it was full of different bags, piping kits, paint brushes, knives etc.  Helen quickly put me at ease as she is very welcoming and invited me to take a seat while we wait for the others.

In front of me lay a box infront of each decorating “station” it had 6 plain sponge cupcakes ready to be decorated and these are what we would be working on.  Various other little piping nozzles and other items I don’t even know the name of.

Soon after the rest of the class arrived consisting of one older woman (Considering im 24, she could be between 30-100, Im not getting in trouble for guessing), and 2 young girls which Helen did say normally she does not allow but considering the class was so small it shouldnt be a problem. 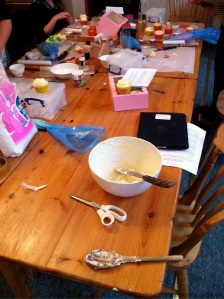 The class should have last 2 hours, however Helen was very helpful and was happy to provide any specific help we needed and it actual over-run until I had to leave to due to a prior arrangement.  I am sure the class continued on well after I left. In the end I produced the above, which my Pirate I am still extremely fond of, I think I really need to find a way of somehow flash freezing him to preserve it.  The other attempts I tried were mainly playing around and I think I need much, much more practice with the use of the piping bag and the various nozzles.

Overall this was a great afternoon spent and was alot of fun, Helen provided a great class and left it very open to everyones different requests to the point we could taylor it almost to what we wanted.  I will definitely be wanting to attend these classes again, and hopefully make a even better pirate 2.0.

More information on these classes etc can be found out on http://www.chepstowcupcakes.com.